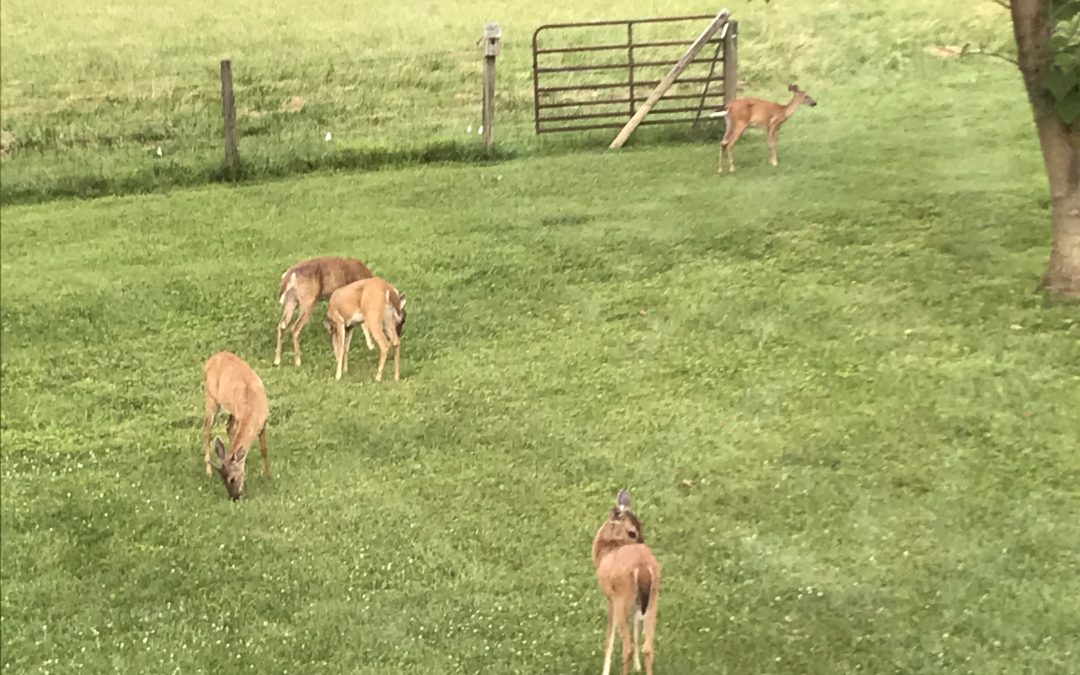 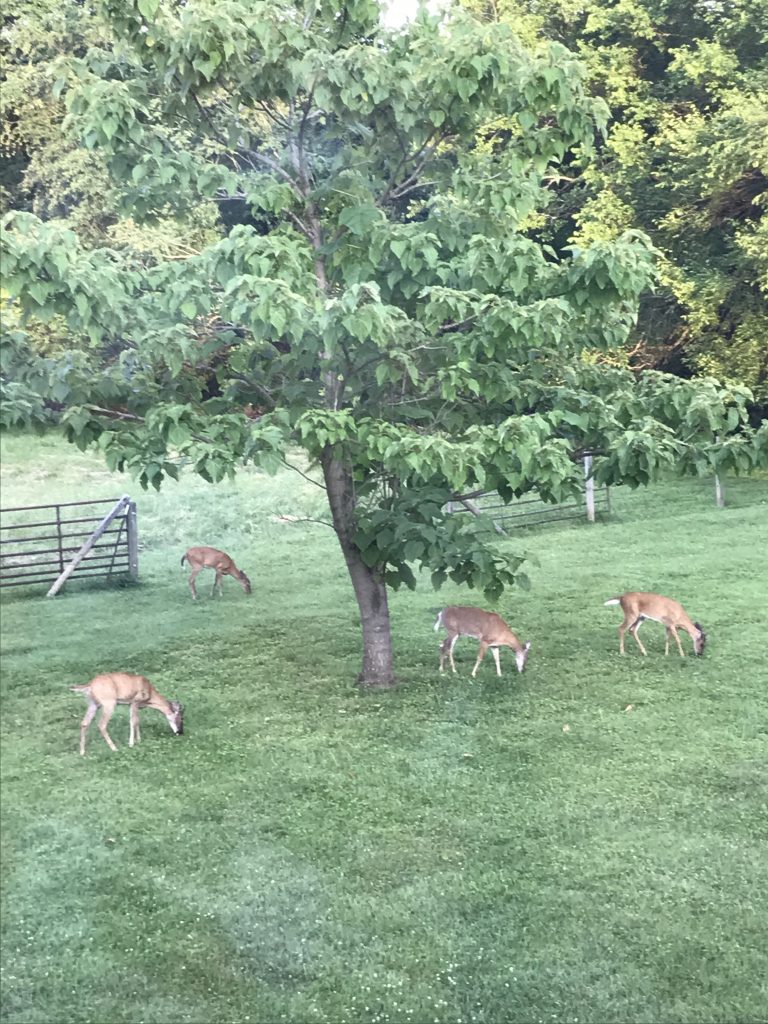 Whitetail deer are just as beautiful and cute as they are maddening. We’ve suffered quite a bit of crop damage over the years from deer pressure. I wouldn’t say we hate the critters, but we would prefer they had smaller appetites! And our deer clearly haven’t read the information on the Rutgers University’s The New Jersey Agricultural Experiment Station (NJAES) website, which is widely regarded as the most authoritative dataset on which plants deer tend to feed on.  Things that Rutgers said deer don’t typically like have been chewed off to the ground at Blue Gables. Coneflowers, hellebores, alyssum, even young forsythia have been mauled.

Our approach is to coexist with them. We’ve had as many as 19 in a herd on our 7-acre farmette. Clearly we’re not going to get rid of them unless we would be willing to use weapons of mass destruction, which we’re not. So, we fence, we use spray, and we hope for the best.

Deer can jump up to 6 feet virtually straight up, so if you’re serious about deer fencing it has to be at least 7 feet tall. Another approach is to put up two 3- or 4-foot-tall fences near each other. This works because deer won’t jump into a confined space and they won’t jump over a fence if they can’t see where they would be landing. Of course we’ve had deer run through our 7 foot fencing at times, but generally we’ve been able to keep the deer out of our blooms.

We use metal fence posts that are 10 feet tall with about 3 feet buried in the ground and 7 feet standing and then wrap flexible nylon mesh fencing material with 1-inch holes around the posts. For added protection, we use metal landscape staples to hold the bottom of the fence to the ground, and we string masons twine with ribbons tied to it every 3 feet from post to post above the fence to create an additional visual barrier.

We have tried various deer-proof sprays over the years and they work pretty well, at least until the first subsequent significant rain. The best sprays contain wolf urine, which spook hungry deer as you might expect, but the problem for us is they tend to make our bouquets smell like wolf urine as well, which isn’t exactly what our customers want on their kitchen tables.

Some folks swear by using human, fox or dog hair, human urine and bath soap shavings to deter deer.  A common way to use hair is to put it in a pair of pantyhose and tie it shut.  The hair-filled hose can be tied to a fencepost or pinned to the ground.  Some farmers cut shavings from a bar of Irish Spring soap as they walk around their gardens.  Rain tends to break down the soap and spread its fragrance.  Other farmers save their pee and pour or spray it round their plants.  In our experience, deer are adaptable, and over time, no single odor remains effective, with the possible exception of wolf urine in the form of deer spray.  That stuff is so foul that deer won’t eat stuff it’s sprayed on.  If you’re going the odor route, we think alternating several methods will give you the best shot at working.

Although we don’t have any canine pets, some people use dogs to patrol their crops. We have heard from other flower farmers that this works pretty well in deterring deer. Of course the dogs have to live outside even overnight, and that exposes them to the elements, which some pet owners don’t want.